Ever since hockey sticks were created, players have been honing them in one way or another to make them more controllable in their hands, make them feel and control the puck better and make the puck either easier or harder to detect when it comes off their stick. Hockey tape is one of the most popular tools used as it is always available. Players have experimented with different ways of taping the handle either to keep the stick in their hands or to improve the feel and control of the stick. They have also used different patterns of tape on the blade to improve stickhandling or shot accuracy. 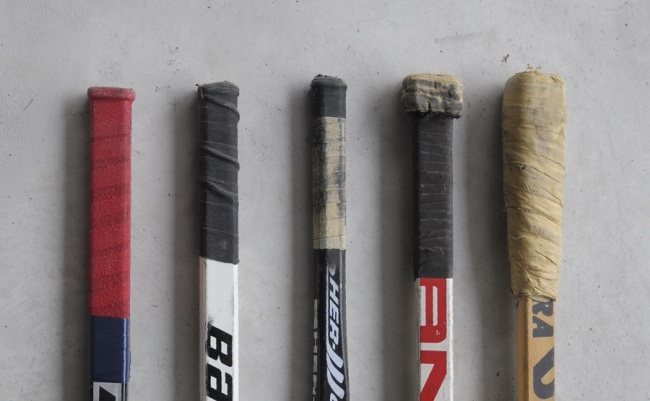 2008-09 Alex Ovechkin - Represents one of the most common methods used today, a simple wrap with a thin ring at the very end.

1998-99 Richard Zednik - Hatcher, Zednik and others liked to use a string wrapped under the tape to improve the grip and feel of the handle.

1999-00 Peter Bondra - Hunter, Ciccarelli, and Bondra liked to shave the handle first before taping it to make it smaller and more rounded.

1983-84 Mike Gartner - Many players of the late 70s and early 80s liked a large tape knob on the end of the stick to make sure it stayed in their hands. 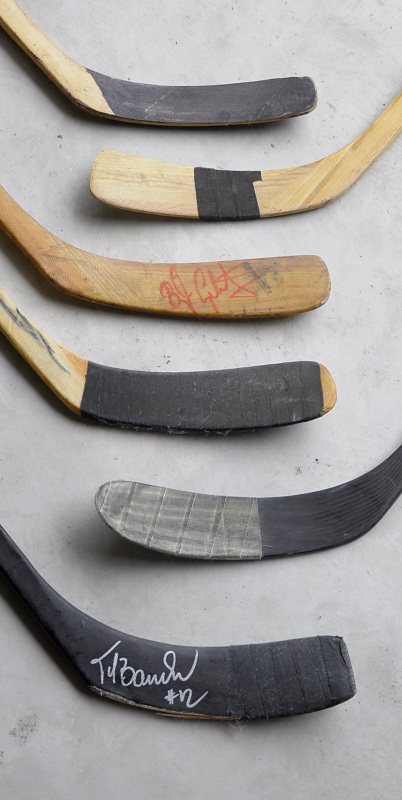 late 70s Guy Charron - many players in the 70s and early 80s would paint the blade black to make it more difficult for the goalie to see the puck coming off the blade of the stick.

1979-80 Mike Gartner - It also wasn't uncommon to see a player only use a small ring of tape in the middle of the blade to help control the puck.

1987-88 Bengt Gustafsson - Gustafsson was one of the only players who still did not use tape on the blade of his stick in the late 1980s.

2009-10 Alex Ovechkin - Alex Ovechkin prefers tape only at the end of the blade, but sometimes he blacks out the tape to make it harder to pick up the puck.

1999-00 Peter Bondra - Bondra painted the blade of his sticks black and then used black tape just on the blade end. A good used Bondra stick will show a slight cracking or chipping at the heel from his slapshots.

The photo above shows the many different brands and types of sticks used throughout the history of the Capitals. In the 1970s almost all sticks were unpainted. Then in the 1980s, manufacturers began painting sticks white, red, black and sometime even blue or green. In the mid-80s Easton developed a two-piece stick with an aluminum shaft and wooden blade. Mike Ridley was one of the first players in the NHL to use this type of stick during the 1986-87 season. The late 90s and early 2000s brought in more modern materials to hockey sticks such as fiberglass, graphite (carbon fiber), kevlar and even titanium. Some players, like Peter Bondra, resisted the change and stuck with wood sticks.